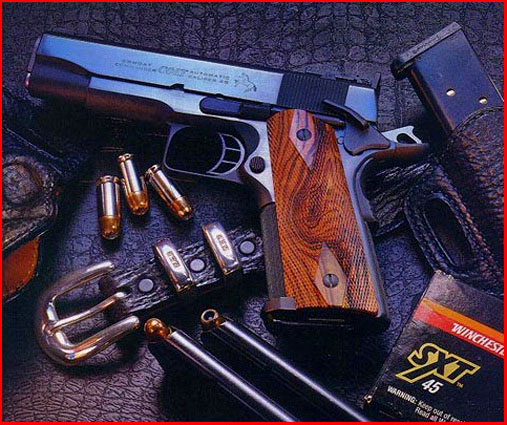 Given the heritage of the Colt Commander, it came as no surprise when master pistolsmith C.T. "(Tim)" Brian of Colorado selected a Series 70 steel gun to showcase his remarkable talents for AMERICAN HANDGUNNER. Tim is nothing if not a traditionalist, and his selection of this classic fighting pistol is in keeping with his specialty of flawless custom carry guns.

A charter member of AMERICAN HANDGUNNER'S elite Club 100, the nations top 100 pistolsmiths, Tim has been plying his trade since the early 80's. I first met the easy-going gunsmith in 1986 at the IPSC Nationals where he showed me a gorgeous three-caliber set built on a Colt Government Model with three different slides in .38 Super, 9mm and .45 ACP, which, incidentally, were the original calibers of the Commander.

I nodded sagely as I examined the workmanship. The guns were perfect. In another ten years, I thought, this kid might be ready for a feature story in AMERICAN HANDGUNNER. There is, after all, such a thing as paying your dues.

Eleven years later, Tim has paid them. With interest. The Brian Commander is a stunning example of a true handmade custom Colt. From the subtle refinement of a French border along the slide to the custom welded mag funnel, the craftsmanship of this pistol is as good as it gets. In fact, it rates the highest accolade I can pay to a pistolsmith's work.

Tim runs a true 'one man' shop. Each and every gun for each and every client is painstakingly hand-built by Tim Brian himself. "Just between you and me," Tim confided, "I don't think there can be such a thing as a 'production custom.' A custom gun should be made to a person's individual demands, needs and tastes. I don't think you can have a true custom unless it's made one at a time, just for the client."

Evidence of Tim's attention to detail are everywhere on his guns, but the best place to look for evidence of quality is where the rubber meets the road: the checkering. Tim hand-cuts all of his checkering, eschewing the mill-cut checkering that has become all too standard in the profession in the last few years. So a checkering file ruins your arms? So your elbow creaks in the winter and your tendons pop loudly in your hands when you squeeze them? Clients pay for handmade work, they get handmade work.

"I guess if there's one thing in custom pistolsmithing that separates the man from the boys, it's metal checkering," Tim observed. "'most of the checkering you see these days is either machine cut or machine stamped."

"'Not from this shop. The checkering from this shop is completely hand-cut. Sharp, deep and flawless. The old way. "No crosscuts or overruns," Tim snorted, his contempt for mass production methods obvious.

A cottage industry has sprung up around the 1911 pistol. The latest Brownell's catalog of gunsmithing supplies contains no less than 45 pages (ironic, eh?) of 1911 goodies. There are two full pages of nothing but thumb safeties, literally dozens of different barrels. Pages of extractors, parcels of ejectors, palettes of pins. For chrissakes, there's an entire page of nothing but guide rods!

This plethora of parts has made for a new genre of "'gunsmith": the parts changer. Here you go pal, your very own one-of-a-kind custom creation made entirely of pre-fit, prepped, drop in parts. "It seemed like all the pistolsmiths were getting into parts manufacturing. I decided to stay with building guns. I figured there would be enough quality parts out there, so I thought I'd just buy the best of them, and modify them as I need to," Tim said.

Modify the parts, that's the key difference. Tim doesn't just slap in a Brown thumb safety and call it done. To his discerning eye, parts are like Goldilock's porridge. Some are a little too big, some are a little too small, but hardly any are just right. His treatment of the mainspring housing is a case in point, as is his thumb safety. "The Brown tactical safety is just a tad too narrow, but his over-size competition model is way too big," Tim explained. "'So I just take an oversize safety and file it down to where I want it. At the same time, he gently rounds the edges of the safety for smooth, thumb-friendly operation. It's the upstroke of flicking the safety on that can abrade a raw spot on your thumb if the underside edge isn't broken with a file. Tim takes care of that.

Tim shortens the frame and welds on a mag funnel, but that's not the end of it. He reshapes the funnel by hand, with a file, until the O.D. is no wider than the frame itself, but the I.D. is dramatically bigger than any bevel job can provide. A nice touch is the way he inlets a pair of Hogue grips around the mag funnel.

Even the protruding tip of the slide stop pin is flattened and recessed into a custom chamfered hole. Is there much chance of pressing the slide stop out accidentally during a gunfight? No. Does Tim Brian pay such close attention to reliability in a combat pistol that he covers even the most remote possibility of failure? Yes.

The Commander is fitted with Kreiger Acc-U-Rails to maintain a dead-nuts slide to frame fit. Acc-U-Rails are precisely machined steel rods that form the bearing surface where the slide reciprocates on the frame instead of wallowing back and forth.

Brett Butler's bat - the leadoff hitter's notoriously well-worn stick - couldn't have fit his hands any better than a Brian Custom. Ergonomics is the hot buzzword for pistols today, but Tim has been filing and radiusing long before Smith & Wesson programmed a computerized human hand into the Sigma's grip design.

I can't quite put my hand on what makes Tim's Commander feel so... so familiar. Taking a firing grip on the gun in a Wilson Tigershark holster -- neat holster, by the way -- I was really impressed by just how smooth and comfortable the gun felt. As Johnny Cochran might say, "It do fit."

Part of that feel comes from the squared trigger guard, welded up and then carefully machined and hand checkered at 30 lines per inch. For those who shoot with a finger-forward grip for increased leverage to pull the muzzle down from recoil, the squared trigger guard is a tremendous help. Of course the fine 30 line per inch checkering contributes to the soapbar feel of the pistol, too. Course enough to grip yet not so sharp as 20 line per inch, the front strap's checkering allows a smooth yet solid purchase on the weapon. The custom fitted Brown beavertail contributes to the handling too. Never one to simply drop in a part, Tim filed and reworked the beavertail to give an even higher grip.

Inside the carbon steel Combat Commander lies more evidence of Brian's subtle refinements. A lowered and flared ejection port is standard fare, but notice how Tim comes in with an 1/8th" mill cutter and squares up the front left corner. Attention to detail.

The nose of the ejector is carefully profiled to fling empty cases away from the shooter. ""You can tune an ejector to throw the empties in a five gallon bucket if you want. I like to set it up to throw them straight out to the side or even a little in front," Tim said. Sure enough, the cases landed in a tidy pile just slightly in front and four feet to the right. The extractor is also tuned with the hook cut and nose profiled to take a solid bite on the case for 100 percent reliability.

The trigger and hammer are from McCormick. Tim fitted the hammer for maximum safety with full engagement of the sear. The pull is a consistent 4.25 lb.. On a Brownell's trigger pull gauge. Crisp and smooth with no backlash, this is the perfect pull for a carry gun.

The front sight is a serrated ramp with a Tritium dot to mate with the Tritium bars in the Bo-Mar BMCS rear sight blade. As Massad Ayoob so aptly phrased it, tritium night sights show up like landing lights on a runway. Every carry gun should have them now that they're more widely available and not prohibitively expensive like they were only a few years ago.

I was genuinely impressed with Tim Brian's workmanship, which can only be described as Master Grade. The blue job alone represents several tedious man-hours of hand polishing. "'No power buffing equipment is used. This is the only way to keep lettering sharp and crisp. The end result is a deep, dark, rich blue that is well worth the extra effort", Tim explained.

Many pistolsmiths who specialize in the 1911 are governed by a cookie cutter mentality. Spit "em out as fast as possible, one just like the next. To facilitate this assembly line process, the pistolsmiths want you to order a Limited Deluxe, Carry Custom, Executive Elite or some such "package" from their catalog. Occasionally you're allowed to make a tiny decision - flat or arched, Novak or Bo-Mar. But for the most part, you take the 'package" as is. Get this: Brian doesn't even list any "packages" in his catalog, not even a basic "'Street tune!" There is only a list of work performed, with parts and labor included. You, the client, are to choose exactly what you want on your Brian Custom Pistol.

Tim's prices are more than reasonable, considering the quality. A 25% deposit is required at the time an order is placed, with the balance due upon completion, which is not long by most shops standards.

C.T. Brian waited 11 years to earn a cover story in American Handgunner, which he finds perfectly all right. Quality evolves over time.