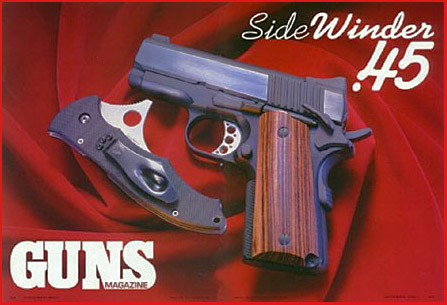 Like a snake beneath the desert sand, this custom 1911 from pistolsmith Tim Brian is completely undetectable and ready to strike.

Master pistolsmith Tim Brian specializes in handcrafting custom 1911 pistols to a level of refinement rarely seen in today's "production custom" world of gunsmithing. Brian's newest creation is a customized Kimber Ultra Carry that he calls the SideWinder, which is designed as the ultimate rendition of a .45 ACP Government Model slimmed down to a concealed carry masterpiece.

The Kimber Ultra Carry features an abbreviated slide and a 3" barrel, shorter than a Colt Officers Model. Many regard Kimber's Ultra Carry as the best out-of-the-box 1911 for concealed carry, but to Brian's discerning eye, the Ultra Carry appeared as a lump of coal.

"While the box-stock Kimber is bit of a diamond in the rough, it has the capability of being modified to a level not seen before in such a small carry gun," Brian said. With file in hand, Brian set about reducing the overall size of the pistol and, at the same time, upgrading the gun both cosmetically and functionally.

The basic components of the Ultra Carry - the frame, slide and barrel - were more than up-to-snuff for the discriminating pistolsmith. "While some aluminum frames from other manufacturers don't impress me with their track record, Kimber has done some pretty extensive testing with theirs. Made of 7075-T7, these frames have been tested to 20,000 rounds with no measurable distortion or wear. Plenty tough for a daily companion," Brian observed.

That's the good news, said the doctor, now for the bad. "However, with the exception of the slide, frame, barrel and recoil spring system, everything else is pretty much destined for the garbage can when an Ultra Carry crosses my bench," Brian reported.

Brian tosses all of the internal parts, like the extractor, firing pin, ejector and mainspring housing, into the circular file, replacing them with CNC-machined tool-steel parts from the finest aftermarket manufacturers. "I'm not a fan of the MIM [Machined Injection Molded] parts that Kimbers come equipped with," Brian sniffed, referring to Kimber's extensive use of the cost-cutting method of manufacturing.

MIM parts are essentially made of "melted metal" and the downside is that they lack the molecular grain structure of machined steel. MIM parts are made by pouring a glue and powered metal particles into a mold, heating it up so that the glue bonds the powdered metal, and then melts away. The advantage of MIM parts is they come out of the molds completely finished because the molten metal can take a final shape inside the mold, unlike forged or cast parts that must be finish-machined.

Brian replaces the extractor with a custom made one that he recuts and tunes by hand. He polishes and throats the barrel's feedramp to assure perfectly reliable functioning of the Lilliputian .45.

Most of the metal work on the SideWinder is done by hand, with files and polishing sticks. including the finely wrought, handcut checkering on the front strap.

The checkering on the front strap is cut at 30 lpi, by hand, using a special fixture Brian designed and built just for that purpose. He begins the laborious process by truing the radius of the front strap and then meticulously laying out line after line of the finely cut checkering. Finally, he gives his work a light brush with a bead blaster just to take away any overt sharpness in the handcut diamonds.

"Time consuming, but there's just something about handcut checkering that machine cut checkering can't duplicate," Brian said. That "something" is the knowledge that a master craftsmen applied his skilled hand to a machine-made object, breathing vitality and pride into the inert metal.

"Each and every individual part is modified until it achieves absolute perfection in both looks and feel. Anybody can install parts. The difference in my work comes from making sure all of the parts and pieces that make up a pistol flow together," Brian said.

The majority of the work on the SideWinder involves the gradual shrinking of the Ultra Carry and a host of fine touches to make it aesthetically and practically pleasing.

In order to reduce weight and to improve the gun's cosmetic appeal, Brian carefully narrows the slide. He removes just enough material to smooth the slide, but not enough to weaken structurally. It allows the master pistolsmith a beautifully flat plain to polish for that deep "Colt blue" luster that the SideWinder boasts.

With but a nubbin of a grip safety, your hand can ride considerably higher on the pistol's backstrap, bringing it closer to the bore line of the gun, giving you maximum recoil control, not to mention greater concealability. These are good things. The downside is that such a high grip offers up the fleshy web of your hand to the gnawing of the hammer. Hammer-bite is a common problem on the 1911, which is why beavertails were invented in the first place. What now, bobbing off the beavertail?

The answer is to simultaneously bob the hammer. "I'm sure this will stir up some controversy, but if you think about it, you really can't come up with a logical reason why you would need to be able to manually manipulate the hammer of a carry 1911," Brian stated. Indeed, there is no malfunction drill that requires a second strike of the hammer; tap-rack-bang the preferred solution for dud primers.

"No hammer bite is possible, and printing is less of a problem. I've always liked the feel of a Browning Hi-Power in this area, and the flush-fit grip safety captures some of that feel, albeit thinner," Brian noted.

The SideWinder features one of the nicest carry bevel packages of any custom 1911 GUNS has tested. Brian carefully radiused all the sharp edges and corners, blending them gently by hand with file strokes. The bottom edge of the slide is particularly noteworthy, beveled along its length. This is a tasteful touch that few pistolsmiths bother to address.

Brian replaces the stock Kimber thumb safety with his tactical lever, but he doesn't just swap parts. The skilled Coloradan pistolsmith also re-contours the safety, smoothing and polishing it for a more comfortable fit. It snicks on and off with a crisp snap, not too stiff, not too easy, just right.

Gone is the stock Kimber trigger and in its place is the classic three-hole aluminum combat trigger, upgraded with Brian's cosmetic pinholes. By careful handfitting, Brian removes all vertical play and tunes the trigger for minimal over-travel. The sear release pressure is set at 4 lbs., perfect for a carry gun. Brian is capable of exquisite 2 lb. competition triggers, but he well understands the stupidity of a hair trigger on a carry gun. Besides, this master's 4 lbs. feels like two, so perfectly polished are the hammer hooks and sear nose for that iciclesnapping crispness.

The sights are also custom: a set of extreme low mount fixed sights, fitted with Brian's special bar-dot-bar tritium inserts. Brian melts the Heinie sights right into the Kimber slide, blending the two parts so expertly that they appear as one.

The top of the slide features a French border, a nice cosmetic touch. The rear of the slide is delicately serrated at 40 lpi.

Note carefully that Brian does not use a polishing wheel. All of his radiusing is either precision machined or cut with a file, by hand.

We admit to being somewhat skeptical of the bobbed hammer and customized tang, having been bitten before by "bobtail" 1911s. Once the bleeding stops, it's not so bad, but we just hate to clean the blood off the shooting bench. No disrespect intended, we began by wearing a glove, just to be safe.

We shouldn't have doubted Brian's work, for the SideWinder's slide cycled without so much as kissing our hand. The little gun was a pleasure to shoot with far less felt recoil than one often expects on short-barreled .45s. The reason is that the slide mass is reduced to such an extent on 3" barreled 1911s that the rearward impact of the slide on the frame is lessened enough to offset the diminished weight.

In other words, the SideWinder was easily controlled. Double taps were typically 2" to 6" apart on an IPSC target's torso. Every now and then a snake-eye appeared - a pair touching - but as with any pistol, controlling a double-tap that well is more a matter of luck than skill.

Accuracy was about what Brian had anticipated: "The slide-to-frame relationship is fine straight from the box for a combat type weapon. Same with the barrel, which I would call a 'semi-match grade.' It's plenty accurate for this type of weapon, capable of at least 2.5" groups at 25 yards."

Our groups, shooting a variety of 185 gr. JHPs and 230 gr. Hardball from Federal, Winchester, Black Hills and Cor-Bon resulted in an overall average of just under 3" at 25 yards, from a supported rest.

Offhand, shooting in a modem isosceles stance at seven yards, the SideWinder really showed its own, sending controlled pairs into the buff-colored cardboard as fast and as centered as I could hold. Mozambique drills - two the body, one to the head - required a good deal of concentration because the short sight radius of a 3" barreled slide. Anytime you have a short sight radius, the front sight had better be deadnuts centered and flush in the rear notch; this applies to snubnose revolvers as well as to sub-compact 1911s.

While Kimber has certainly advanced the quality of production 1911s to a new level, the owner of a SideWinder will revel in the knowledge that the gun he holds in his hand is the product of countless hours of patient handwork. This, in our view, is the essence of aesthetic appeal.

Tim Brian is a consummate craftsman, the quintessential metalsmith-as-artist. He works alone, without helpers, and every gun that leaves his shop bears the distinctive stamp of a master's work.

The SideWinder is a special edition pistol, limited to only 200 custom built units.  Custom options and serial number reservations are available, as they should be. If you call to inquire, you will speak to Brian personally. It's a lonely job to work in a one-man shop, but someone has to keep tradition alive.