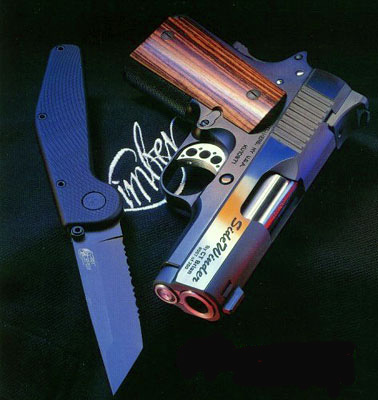 They make their livings building, customizing, modifying and otherwise personalizing guns for the most demanding customers. They can transform the ordinary gun you bought over the counter into a tack-driving, smooth-shooting and functional work of art. Their guns are the subject of magazine photo spreads and gun club bragging. If you’re like me, you’ve lusted after a pistol by the likes of these gentlemen since that first glossy photo in a gun magazine, or that first visit to their website. They are some of the finest pistolsmiths in the world, most with backlogs of orders that run into the years.

Given that each of these men can quite literally build almost any configuration of a gun imaginable, an interesting question arises—what gun rides in their holster, accompanies them on their hunting excursions or goes with them to the firing line? When you build guns for a living, what influences your choice of firearm for your own use?

Call C.T. Brian "Mr. Brian" and he’ll ask you to call him "Tim." But don’t mistake his friendly attitude for a less- than serious approach toward his pistolsmithing. Long known among serious shooters for his meticulous work, C.T. ‘Tim’ Brian has a deadly serious attitude toward the meticulously crafted defensive pistols that have slowly flowed from his shop in Grand Junction, Colorado, since he began pistolsmithing full-time in 1987.

"I direct my energies toward building exquisite concealed carry customs for the discriminating customer," Brian says. Don’t look to him for race guns or gadget-laden game guns (although the occasional full-bore bullseye pistol might exit his shop on occasion). Tim’s busy building guns for serious people who are serious about their equipment. Just like he is. "I carry all the time, period," he explains. "I have CCWs in Colorado and Utah, and I simply won’t visit a state that won’t recognize my right to carry."

This businesslike approach continues when you ask Tim if he’s built any guns he’s especially proud of. "I’ve built guns for ‘people of fame,’ but my policy is complete privacy for my Clients."

Dropping names might impress a few people, but that’s not Tim’s speed. His success says that his clients approve. So what does this master pistolsmith strap on each day?

"I carry what I recommend—my SideWinder," he explains. How confident is he that he’s found the right recipe for a defensive handgun? "My wife also carries one."

Starting with a Kimber Ultra Carry, Tim changes out just about everything but the frame, slide, recoil system and barrel in converting the pistol to his special SideWinder model. First to go are the Metal Injection Molded parts that Kimber (and most other manufacturers) use for fire control components. "I replace all the internals with tool steel parts," Tim says. After that the slide is given a distinctive and weight saving contour, and extreme low mount Tritium sights are installed.

Most radical are Tim’s FlushFit hammer and beavertail. The FlushFit hammer is totally spurless, something that’s somewhat jarring for those familiar with the 1911 platform. “There’s no need to ever touch the hammer on a 1911-style carry gun,” Tim explains. “You really can’t come up with a logical reason why you would need to manually manipulate the hammer of a carry 1911.” With no hammer, the beavertail takes on a significantly different character—smaller, more concealable, the grip safety on a SideWinder is higher and shorter than possible on a gun with a hammer. Tim has a specific reason for this modification, “I’ve always liked the feel of the Browning Hi-Power in this area, and the FlushFit grip safety captures some of that feel.” Add a complete hand melting of the entire pistol, hand polished blued finish, a crisp 4-pound trigger and hand modified safeties and slide stops, and you’ve got C.T. Brian’s idea of the ultimate carry pistol. As he puts it, “Even from the SideWinder’s three-inch barrel, being hit with a .45 is like being struck by lightning.”

Few pistolsmiths pursue the ultimate carry pistol with the relentless zeal of C.T. Brian. For those who carry their Brian Custom pistols to defend their families and themselves, they wouldn’t have it any other way.

Well, we’ve looked at what some of the top pistolsmiths carry when it’s their bacon on the line. While their preferences range from small and concealable defensive guns to beautiful hunting pistols, some themes emerge, reliability, practicality, ergonomics and quality. In a world where the focus of almost every business on earth is to make more and more products as cheaply as possible, these men are an anachronism. Their services don’t come cheaply, and the truth is that the vast majority of shooters couldn’t really understand why a small percentage of the shooting fraternity demands the work they do. They are pursuing perfection in a disposable world, making both aesthetic statements and working tools of the highest standard and for the most critical of purposes. And each seems solemnly aware of the responsibility they have, aware that their clients will go out in the world prepared to hunt dangerous game, or defend themselves against all the modern perils we face, armed with the tools they have created. For those who appreciate having a man you trust build the gun you may have to use to save your life, that’s a comforting thought.