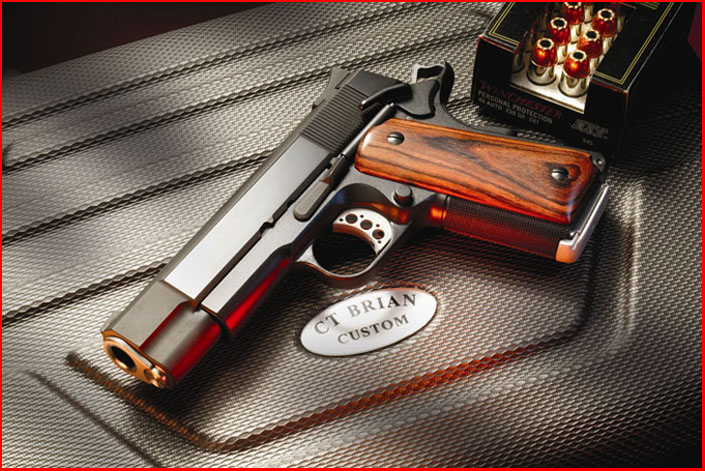 It's a dangerous thing to speculate about your dream gun around a custom pistolsmith.  While we mear mortals are in no danger of turning all those crazy specifications into actual, functioning firearms, give that same idea to a master of the pistolsmithing art and things can change, often rapidly.  A law-enforcement type recently learned this when he started the "what if?" game around CT Brian, a Master Pistolsmith with a history of turning ideas into polished tool steel.  The conversation started with, "You know, I can't believe nobody has ever built the ultimate pistol."  The gauntlet was tossed.

Seems this cop, a Colorado area peacekeeper named Tom Early, got to thinking about how all those other mulitgun sets, with multiple slides fitted to a single frame so as to go from duty ready full-size gun to mini-size concealmeant gun, were going about it just about backwards. He reasoned, quite logically, a commander length slide worked pretty darn well for both on- and off-duty carry, but the frame was the part needing a size adjustment.While plenty of people do - and many are doubtless doing it right now - concealing a full-size 1911 frame requires a bit of work, a good holster, the right attitude and the right attire.  If you're on the thinner side, it requires even more work, since there's simply less waist band to work with.  And while many get around this by switching guns, the obivously bright Mr. Early realized an officer's sized-frame mated to the same commander length slide, was probably just the ticket for a concealment gun.  Hmmm.....

But most people agree that mini-frame isn't ideal for duty carry.  In an open holster, the standard commander sized frame carried just fine, and gains a round in capacity.  Handles a bit better, too, for most types of shooting.  So our cop-friend decided he wanted a commander frame fitted to this same slide.  Using the same slide group meant accuracy and function would be consistent between the two variants, and careful fitting and trigger work would ensure the only noticeable difference in handling would be the grip size.  Of course it would be nice if both combinations shot with match accuracy, complete reliability, had a perfect trigger pull and looked sexy, too.  Might as well want it all, right?

Everybody who's a serious shooter, and lots of people who aren't, sit and speculate about building the perfect gun for a particular purpose. Not everybody does it around a pistolsmithing artist like CT Brian, and the proof is in the photos.  Turns out that a game of "wouldn't it be nice?" gets turned into hand-lapped parts and  immaculately-checkered steel pretty fast in the Brian shop.

Meet frame number one, the mini-frame.  Looks great, of course, since Tim Brian couldn't make an ugly gun if he tried.  First thing you'll need to know, though, is beneath that pretty exterior lurks a genuine thug, since the Armour Tuff finish is hiding a titanium heart, as it turns out. But in spite of the renowned difficulty of machining titanium, all the usual touches from a Brian custom are here:  immaculate 25 lpi checkering, contoured mainspring housing checkered to match and a commander hammer hooked up to some precision work under the hood to yield a "perfect-for-carry" four-pound trigger pull. Little touches like a melted mag releasee and rounded butt help the little guy hide effortlessly under casual attire and carry with the ease of a much smaller gun.  Between the light weight of the Ti frame and the detail work Tim's done here, it's hard to imagine a .45 auto that could carry and conceal this easily.

Frame number two is the commander-size frame.  All steel here, a bit of weight can help a duty pistol with recoil control.  Same trigger and trigger pull, so there won't be any adjustment needed when Tom swaps frames.  Checkering on the front strap and mainspring housing, while still immaculate, is a bit coarser at 20 lines per inch, adding some traction during stress.  The mag release is a bit more prominent, with checkering at a genuinely spooky 50 lpi, replacing the melted button on the mini.  There's a SuperWell mag well seamlessly melted into the frame to help keep the beast fed, and melted slide stop and safeties that will still feel good after a long day qualifying.

Sum Of The Parts

The final member of this triumvirate is the commander-length slide. There are any number of serious gun-toters who will swear the commander-length slide is just about the perfect compromise - big enough to shoot well, small enough to hide easily.  They'll get no argument from me or Mr. Early. Tim Brian starts with the usual ejector tuning, ejection port modification and other work that's defined as state of the art in combat 1911's.  The .45 ACP barrel has been lapped to fit the slide, while the slide has been meticulously fitted to each frame.  And while it may be difficult getting match accuracy in fitting a slide to one frame, the problems are exponential in getting a slide to fit two.  That Brian has overcome these issues is proven by the match-level accuracy this system displays with both frames.  That'll keep a pistolsmith up nights. After performing all the work that makes a 1911 run correctly, Tim does the things that separate a high-quality, functional gun from a work of art.  The first thing you notice along these lines is Brian's "FlatBack" treatment given to the rear of the slide and the Heinie sight.  Instead of simply serrating both, Brian has actually mated the sight and slide into a continuous flat plane.  Essentially, the rear sight picture continues all the way down the rear of the slide.  As Tim puts it, "It's something new I've been doing.  It makes for a very fast sight picture."  Tim then sights the pistol and custom-installs tritium vials that shoots perfectly to the actual point of aim.  Simple, uncluttered and elegant, while improving usability and function; much like the rest of the pistol. I have to admit the next feature is a matter of taste.  As an old-timer who grew up on 1911's without front serrations, I've never quite adjusted to their look (or use) on my guns.  And while I know that many like to use them for press checks and loading/unloading, I've simply never found a need or desire for them on my 1911's. It appears Mr. Early agrees, because he's had Tim Brian perform that most beautiful of all cosmetic operations, the "High Power" cut, on the front of the slide.  Removing a small amount of metal from just forward of the ejection port, this treatment gives the slide a classy, sophisticated look and still gives a surface to grasp for press-checks and the like.  It's the finishing touch on a beautiful slide. I've mentioned more than once that every combination of these parts yields "match grade" accuracy.  Just so we're clear I'm not fudging this description, I'm looking at five targets, each with five shots at 25 yards with the officer-size frame.  The largest group is exactly 1".  And while everyone would probably agree that level of accuracy isn't actually required in a defensive fiream, there isn't a serious shooter out there who wouldn't want it in his own gun - as long as he didn't have to trade reliability for it. With a gun out of CT Brian's shop, you don't.  As Tim puts it, "In a serious social encounter, you damn well better have absolute faith in the weapon you're carrying."  Complete reliability is built into every Brian custom, before any other work even begins. So we've established this set of guns was built to some of the highest standards available on this little blue rock we call home.  The question remains, however; how does it all actually work?  Actually, very well, as it turns out.

The fire controls are exactly the same on both frames, the trigger pulls are matched perfectly and the sight picture (with that beautiful flat sight plane), remains exactly the same however the parts are combined. The training and practice logged on one configuration translates seamlessly to the other, and the hand and eye get to know the whole assemblage as a single gun.  And yet you have the convenient carry of a mini gun and the fighting ability of a commander-sized gun with less than a minute's work.  The idea is clever, and leaves you wondering why it's taken so long for someone to put it together. CT Brian has made a reputation as a creator of precise, elegant 1911's that ride in the holsters of serious shooters all over the world.  While other 'smiths add CNC machining and outsource procedures to increase their production, Tim keeps doing things the way they were done in the golden age of building custom guns. "My fear is that hand building custom 1911's is a dying and soon to be lost art," said Tim.  "And I'd much rather be lumped in with the very few that did it the Old-World way," he explains.  And while good guns can be made in a variety of ways, I for one am glad to hear Tim does it his way.